That Show Be Coolio

Bounced on over to the Middle East Downstairs last night to check out what was going on, and to catch a glimpse of Coolio. Show was put together by the kind hands over at LT Live and Leedz Edutainment, and they had quite the line up for everyone to see. Performers were; Peoples Posse, Zayne Starx, Staxx, Kabir, Charlie The Most, Light Bright and last but not least... Coolio.

I'm just going to go right out there and say it, Peoples Posse was rather unpleasant. I'm not sure if they were trying to be funny, or if their group is a parody gone wrong, but the four white boys trying to rap on stage was literally that, four white boys tryin' to rap. Unnecessarily vulgar and disrespectful to the crowd I just rolled my eyes until their set ended. I'm pleased to say that next performer, Zayne Starx was a breath of fresh air. Solo performer who spit his lines and did his thing. Up next came the Staxx duo. The guys had a very lax vibe to their set and I enjoyed chillen' out to it. Kabir performed next, the drummer and keys/vocals pair had a killer feel and some classic hip hop beats.

Charlie The Most came on next and hot DAMN are they a group to look out for. Rockin' a lively four piece horn section, occasional and colorful violin, locked in drummer, energetic keys, two complementary and talented guitarists, funky bassist, and a lead vocalist who could sing till the cows came home, Charlie The Most was the highlight of my night. They started their set like wild fire and didn't have to find the pocket - they were already in it before they even stepped on stage. Bursting full of raw funk, soul and rock n roll, their sound was full and captivating. Their chemistry on stage was contagious, especially when the lovely Lindsay Lucas stepped on stage to sing. Lindsay's range is powerful and beautiful and an absolute perfect blend of spices with the band. I highly recommend checking these cats out online, they have a name your price album available for download on Bandcamp. (It's a good investment, I've had the album on repeat all morning). 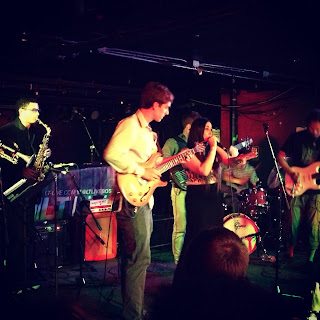 Up next was a band I knew would spark some engines. Having seen them several times already, I was especially looking forward to Light Brights set. With a few improvements since the last time I'd seen them (adding tight and powerful drummer Federico Romeo to the lineup), Light Bright came on and showed what they got. With a delicate air of hip hop, heavy grooves, and a taste of weird that only comes from Frank Zappa influences, the boys stood out on their own and got everyone's heads moving.  One of my favorite parts (and always has been) of Light Bright is the effects pedal used by one of their sax players. It's oh so tasty and dances on top of the groups already fresh sound. They also have a vibes player who compliments all the sounds just so. If you haven't already, go see Light Bright. Absolutely a huge band coming up on the scene in Boston, and the best part is, their all some of the chillest cats you'll meet in town as well. 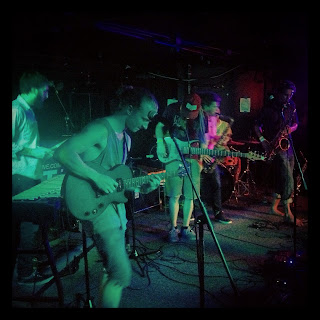 Finally, the crowd was graced with the presence of rap legend, COOLIO. He came in owning the stage, dancin' up and down it like he was still in his prime. Unfortunately tho, his dreads are down to two bundles he keeps right on top of his head. Throwing in classics like Gangsters Paradise and 1-2-3-4, Coolio did his thing. I'm glad I got the chance to see him and it was an awesome cap to a fantastic evening of talent. 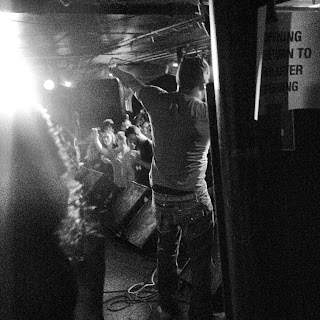 My recap will be short and sweet: CHARLIE THE MOST and LIGHT BRIGHT. Get familiar and go see both bands. Your ears will thank you.

It had been a while since I'd dropped by and checked out the Allston underground scene, and this past Saturday night I had the opportunity to check out a few bands at the Red Cave Fest. Having been to shows in this particular basement a fair few times, I was intrigued to what artists I was going to see. Artists on the bill were: Liv Gibson, Jordan Okrend, WAM, ODDnary and headliner, People The Kangaroo. Unfamiliar with any of these artists, I was expecting an overall similarity of genre's between performers, but there was none. The artists ranged drastically from acoustic singer songwriter, to heavy indie rock, to straight trapt/house DJ's. Most certainly one of the more jumbled and unflattering line ups I'd seen come through the Allston underground scene. Artists are meant to compliment each other throughout the entire show, am I wrong?

When I arrived to the venue the artist setting up was miss Liv Gibson. Sweet as pie, she certainly held her own, performing an array of originals. What let me down was how short her set was, but then again  in Allston basements, anything is probable to happen. What threw me off though was that she was opening for big name band - People The Kangaroo. Good artists all around, but not so good of a line up! Regardless, People The Kangaroo came on and show'd what they had to say. Full of angst and power they laid down an extremely solid set that drew the crowd in and got bodies groovin'. The lead vocalist won me over the most, his love and excitement for the music spreading so far I felt his emotion just from watching. This band certainly saved the night in my opinion. After People the Kangaroo performed, the basement quickly turned into dance floor, with DJ ODDnary spinning. Kudos to you lady, you have some beats and I enjoyed the set. Filled with catchy trapt and classic house beats, she did work. But back to my original concern... who put together this line up!!

Overall, certainly wasn't one of my more favorable shows in Allston. The artists held their own and showed their swag, but the clash of the genre's made it hard to stay drawn in. I know it won't be my last Allston basement show, but it does concern me for the effort and thought put into the shows. Make a killer line up and blow everyone outta the water Allston, I know it's in you!!!

Stay fly my friends ✌
Posted by Unknown at 11:12 AM No comments:

This past Friday, I strolled down to Darryl's Corner Bar to see what it was all about. After stepping in the front door I realized it was a good thing I threw on some heels that night because the club isn't for any joe shmo, there's a delicate air of class within the club. After I walked in, I immediately noticed one of my friends playing in the band for the evening. Name of the group: UniqueVisionzCollective, and I'm happy to say they laid it down. With a tight drummer, colorful bass lines, tasty guitar tones and a smooth sax that could serenade you all night long, the group was perfect for the atmosphere. UniqueVisionzCollective have a strong jazz fusion feel with some pleasantly noticeable soul and funk influences.

For my first trip to Darryl's, I truly enjoyed the night out. The vibe is intimate enough for a date night, but at the same time comfortable enough just to go with a good friend (as I did) and enjoy some live music and tasty drinks. Absolutely will be going back for some more live music soon.

Stay fly my friends ✌
Posted by Unknown at 8:29 AM No comments: